Home › Uncategorized › You are Invited to Pause!

You are Invited to Pause! 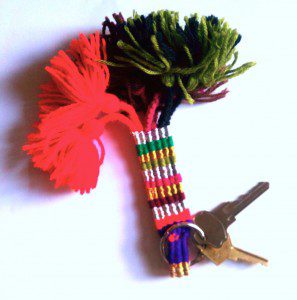 I got the keys to my studio on Friday and I ran home to get a keyring. I picked up the Netflix movie from the mailbox. I had no idea which one it was and I didn’t have time. I had to find the perfect key ring…and I found the one I had bought on Jebel Shams, those gorgeous rocky mountains in Oman.

“You bought that from the guy who owned the goat that followed me into the SUV,” my son remembered. “Yes!” I was thrilled he did. We had gone there six years ago. “And that goat thought I would share my Cadbury Gems!” I felt the wool in my hands. Wool from far far away. Wool with a story…

On Saturday people came to visit. First, it was the pest control technician. Then my friend Kat, who couldn’t believe her eyes. She has the most gorgeous studio I have ever seen—full of her beautiful ceramics, works on wood and fabric—each one a gorgeous story. Yet she liked my empty space.

Then came Colleen who was walking home from the nearby gym. She started telling Kat her idea about stories of recipes she wanted to share at the studio (coming up in Nov-Dec, stay tuned!) and her plans to bake stuff she can never eat. That started Kat off about menus her uncle saved from his time working at the White House and how she and I were going to get all the stories out of her uncle!

Right then, the pest control technician who was getting me to sign the iPad receipt pulled out his phone and showed me a picture of Reagan climbing up the stairs to Air Force One. Then I noticed a young Marine standing nearby. It was him in his youth!

Soon, Lisa stopped in. She was on her 4.5 mile walk and was headed to get coffee at Shirlington. She suggested I do a PAUSE Session for people who don’t have stories and said she was free on Saturday afternoons. So I said “Done! And I will call the class So You Think You Don’t Have a Story?”

There was laughter, a walk, coffee, and suggestions of field trips. Stories about moms and childhood parks. Many memories shared, and a better understanding of the people we call “friends.”

Yesterday the movers came. Young Yuri, a boxer from Ukraine, asked about the different kinds of writings he saw in my art. “When you feel some emotion you can write it out in your language and make it a painting. Then only you know what it is,” he said as I typed it out and emailed his idea to myself. I told him I had learned Russian when I lived in Bombay and he told me to write Fragile on a box full of canvasses. I asked him for the Russian word for Fragile and wrote it in the beautiful Cyrillic script. He made two corrections. I asked him if he liked art. He said he didn’t know the word for it in English but he’d like to learn to make cups, bowls… and he gestured with his hand—he was working with clay. I told him a friend of mine teaches classes in ceramics. Kat does!

When we moved the furniture into the new space the two movers smiled. It was much bigger than the earlier one. “You can teach many classes here! And there is extra space to dance!” Rumba music played on the iPod.

So what art and stories will you bring to Studio PAUSE? The grand opening is on Sept 14, from 4-7 pm and everybody is invited! And the theme at the studio for Sept-Oct is Black And White And… so bring a something along to put on the PAUSE Wall, something that the theme reminds you of. Something that can inspire others who visit. It can be a word, a photo torn from a newspaper, a postcard—anything. There will be a show opening that day, beautiful work by a woman who I have worked with for over a year and I didn’t even know she made art! Black And White And Lines is the title of her show and it will be up all month.

And I  start teaching PAUSE Sessions Monday Sept 16!! So check them all out here and pick something to explore. But most of all, promise yourself some PAUSE and let the creativity and community happen. Can’t wait to see you all soon!!

Oh, and the Netflix movie we watched that night? It was Lawrence of Arabia. I had never seen it before but I bet you have. Now remember those camels and all that colorful wool stuff they were decorated with? The long tassles that swayed when they walked through the desert? Now look at my keychain picture above…

Yup. That’s what I’m talking about! 🙂