A blog post written for Studio Pause by Karen Leggett, author of Hands Around the Library.

There is nothing commendable at all about the federal shutdown – too many lives and projects have been left hanging. But I did take the time afforded by the furlough to visit StudioPAUSE on a weekday, for a BookPAUSE session.

“Write a scary word,” she instructed. 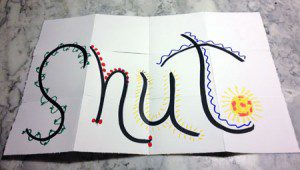 She was decorating her own word at the same time, mingling casual instructions with familiar conversation.  There was an assumption that no matter what the instruction, I would and could comply.  That assumption was comforting and empowering. There was never a moment when “I don’t think I can do this” would have been the right thing to say.

I tried not to overthink but I didn’t want all my decorations to be gloomy, even though that’s the way the shutdown made me feel.  So I mixed it up.

Now time to fold the large paper along a grid.  Then cut along the grid, three squares here, two squares there.  And fold again, this time into a book shape, each fold creased hard with a nifty bone folder tool.

With no advance clues about where each letter or page would fall in the book, here is what happened. 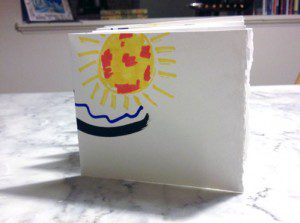 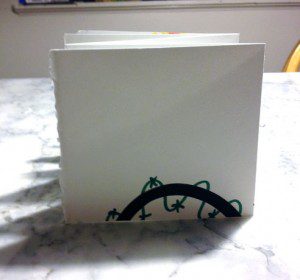 My eyes – Sush’s eyes –  burst with amazement at this somewhat trite but almost surreal discovery. In the midst of a shutdown that makes me see angry red, my creative moment offered a glimpse of bright sunlight. And the barbed wire was relegated to the back page.

Environmental activist Rachel Carson wishes for each child to have a sense of wonder “so indestructible that it would last throughout life.” Carson actually wanted that sense of wonder throughout life… “an unfailing antidote against the boredom and disenchantments of later years, the sterile preoccupation with things artificial, the alienation from the sources of our strength.”

Carson found her wonders outdoors, but they can be anyplace where we brush away the brain clouds and find delight – letting a chance encounter blossom into a new friendship or a project, canoeing or picking apples at an age most people would consider elderly, trying a new food or dance or play, using a paintbrush on art paper instead of the bedroom or the woodwork.

Pause. Create. Discover. Wonder. Be surprised. Life can never have too many verbs. 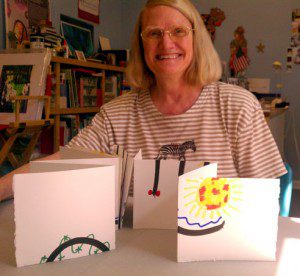 Posted in Uncategorized
Posted on October 16, 2013 by sushmaz