Home › Uncategorized › Can One Word Tell a Story?

Can One Word Tell a Story? 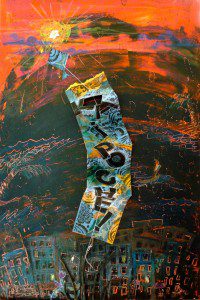 Today, people in India are celebrating the festival of Makar Sankranti, where, among other things, they will fly kites, just like my brother and his friends did when we were kids. I have an artwork, Kaipoché!, Story of a Word, inspired by that memory. It is hanging in a show at the Arlington County Board Offices, 2100 Clarandon Blvd., VA, so I thought I’d share the story here:

Kaipoché!, Story of a Word

Should it be it Kaipoche!? Or maybe Kaipochey!? The way we used to scream it it should be written more like Kai-po-chéééé!!! Actually, the title of this story is a word I didn’t even know the meaning of until my first solo show at Glen Echo Park where my friend told me the meaning. But it is a word I have screamed many times (yes, it was always screamed) from the roof of my apartment building in Bombay, India, on many Januaries in my childhood. We screamed it every time my brother, or one of the  kite-flying friends who lived in our building, cut someone’s kite on the festival-day of Makar Sankranti.

Yet, I have no idea what language the word might be in and what it would translate into in English. “We cut your kite!” might be a translation, I guess, but it is definitely insufficient. After all, our kite string, that special pink manja, was covered in ground glass, its only job being to cut other kites. When our building boys cut someone’s kite we would scream Kai-po-cheeee!, and watch the unfortunate thing float away, its string trailing over the distant neighborhood rooftops even as kids jumped to try and grab it and make it theirs.

But when one of my brother’s kites got cut and everybody except us was screaming Kai-po-cheeee!, I would drop the firki—the reel of manja I held for my brother—and run down the three floors and into the street. There, along with the many street kids carrying long sticks, we’d chase our kite, our eyes on the sky. They would try to grab the trailing kite string with the tip of their sticks and make the kite theirs selling it on the street corner later. But they were not going to get one of my brother’s! I would fight them—at least that’s what I seem to remember—and bring my brother’s kites back to him.

Today, my brother lives in Singapore, my other kite-flying friend, Anoop, in Toronto, Canada, and I live in Washington DC. In a sense, we have been Kai-po-cheeeed! too and caught in the tips of different sticks, far and wide. As time goes by childhood symbols often change meaning and give us a chance to look at things in a new way. Always the same kite, but escaping some hands, picking new sticks.

As for the word, I now know that it is in the Gujarati language and means I am cutting it. But don’t try asking everyone from India if they know this word. My friend from Vashi had never heard it. I guess it was a Santacruz or Gujarati-suburb kinda thing.