Happy Year of the Horse! 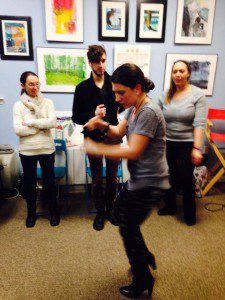 Tannia’s love for dance was catching, to say the least.

Happy new year everybody! And no, I am not late at all—I wish everybody a happy Year of the Horse! 🙂

Leaving behind the old skins and transformations of the Year of the Snake, I really feel the Horse’s presence, energy, and noise. I was away with family at the end of December and realized how I felt so distant from the Studio—cut-off even. I  had nightmares that I had returned and other people had moved in… had set up clotheslines with their laundry drying on it and huge potted plants I couldn’t move…

Being a “businesswoman” is hard but then Studio Pause is also, my own studio, my work space, my space to dream, so when I got back I dug in. And then it started… January 2014 has really been about people who have visited Studio Pause since it opened coming up with their own ideas of what they want to do there.

We have a painter starting an Art Critique Group, where you bring in your work and others give you direction and compliments. A writer is gathering people for a Writing Critique Group. A Mom wants Open Studio time to work on a book of stories for her daughter, and two other moms agree and want to join in. Another person asked if she could come have lunch at the Studio. It gets lonely at home sometimes, she said, and she’d rather be surrounded by art and writing, ideas and energy. So someone decided on calling it the Zarzuela Lunch Pause—where you bring your lunch, eat together, and share ideas and stories. At the first birthday party at Studio Pause, a guest said how it was hard to finish a bottle of wine alone so how about a Wine and Stories Group?  Why not, I said. As long as it is about art, stories, or community it works for Studio Pause.

Then there was the Community Pause with the dance demo where we found a sign-up sheet…. which the guests created on their own! The dancer hadn’t even planned to teach but her story was so powerful and her love for dance so contagious, everybody wanted to learn. We are meeting tomorrow to discuss…

So, starting in February, there will all sorts of new things starting at Studio Pause. Find out more, and come, gallop with us!

Posted in Uncategorized
Posted on February 4, 2014 by sushmaz