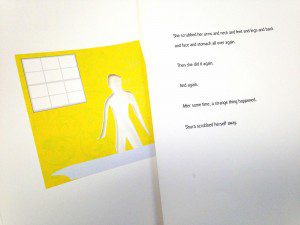 Inside page from Shura, by Richard Rose. Japanese stab bound book, made by hand by Sushmita Mazumdar

It was 2008 when I met Richard, an elderly gentleman who had seen my Handmade Storybooks at an exhibit in Alexandria, VA. He contacted me and told me his wife had told him a story and he had written it down when she was unwell. She had since passed away and he wondered if I could design, print, and bind it into a unique  book so he could share her story, ideas, and glimpses of her life, with family and friends.

I read the manuscript and fell in love with the story of a young girl who has to go live with her aunt. In the new house the curtains were always drawn, the counters clean, the people scrubbed. Only when the girl scrubs herself away does the aunt miss her. She looks for her everywhere, opening windows to call out to her, leaving doors open and letting red dust in, and not scrubbing the lace curtains…

“I found the phrase ‘Cleanliness is Next to Godliness, in the manuscript” I remember telling Richard. “It appears 3 times in the story and the second time I made the writing look like Devnagari script because Mahatma Gandhi used to say that.” I showed it to him and he nodded and smiled. “Any suggestions on the treatment of the third time it appears?”

“You know that phrase also appears in the Torah,” he smiled. I had had no idea! I knew a calligrapher who did Hebrew lettering and she wrote the phrase to look like Hebrew script. Last week a friend looked at the page I had printed for the new edition and she said,” You know, we don’t say God…” and she shrugged.

Reading more about Richard’s wife I found she loved and collected dollhouses and saved them for when she had daughters. But she had sons. I used the dollhouse to inspire my artwork for the book. The book, Shura, has lace curtains, rocking chairs, and doors that open and close. I also found paper with sand pressed into it—red sand—which will fall off as you handle the book over and over, just like he red dust in the story. And at the end of producing the first edition of 35 copies I found the floor covered in little girl images I had cut out from the inside page where she scrubs herself away (picture above). I couldn’t possibly throw them in the trash!

As she does come back in the story (and inspires her aunt to go rolling down the hill with her) I glued her on the back cover of the book, without checking with Richard first. As I stood in an empty church parking lot one evening transferring boxes of books from my car trunk to his I showed it to him. I remember—he had loved the idea and was so happy. 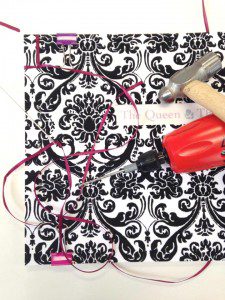 New covers for Richard’s book The Queen & The Crocodile. The books are drilled, sewed with satin ribbon, and hammered flat.

Soon after Richard had another story—another amazing one called The Queen and the Crocodile. Printing those pages out last week I couldn’t believe I had made those collages all those years ago! Mists out of carefully curved vellum, and a rough crocodile with googly eyes. They were pretty cool! 🙂 But the creativity continues as the papers I used for the covers then are not available anymore and so I redesigned them. I tried out various options and then settled on one with focked paper in Victorian designs.

I hope Richard likes the new look of this book. Since I worked on the first editions he has moved to Richmond, VA, so I will not be able to see his face when he gets the books. I know I will miss that experience. But I have his amazing stories and the wonderful art I got to create so I’m happy no matter what.

Posted in Uncategorized
Posted on May 15, 2014 by sushmaz