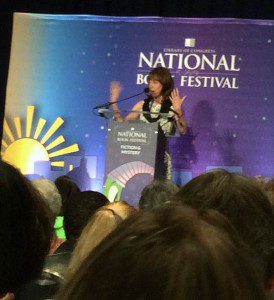 I love the National Book Festival. It is a great way to connect with some of my favorite authors, see them speak, buy their books, and get autographs. As a budding writer myself, it is an invaluable chance to hear actually successful authors talk about the craft of writing, what inspires them, and their process.

Last year, I went with a friend of mine from my writers group. We sat outside in one tent so that we could see Khaled Hosseini, the author of The Kite Runner, speak. He was the last speaker of the day. We wanted to be right up front, so we camped out all day.

Typically, as in every year since its inception, the book festival is held out on the National Mall in Washington D.C. This year, however, they decided to move the book fest to the convention center. This was a highly controversial move. People have strong feelings about where the book fest should be held. Many people hated the outdoors. You are subject to the elements. It could be too hot, too cold, rain, and I have been to the book festival under all of these circumstances.

Other people, such as myself, love that the book fest is held on the National Mall. You can see famous authors, look at the capitol building and surrounding Smithsonian Museums. Yes, it can be too hot, too cold, or rain. You can get sunburned, etc. But it’s the National Mall! You have a sense of place and purpose. It’s awesome. I groused quite a bit that all of this would be lost inside the sterile, climate-controlled convention center.

This year, I went to the book fest with my brother and then met up later with my sister. I was complaining about the loss of atmosphere to him as we walked into the convention center. I was forced to immediately re-evaluate my position almost as soon as I walked into the place. They have a lounge, free wi-fi, and several coffee places, including a Starbucks. The nearest Starbucks to the National Mall is a good 7-10 blocks depending upon where you are on the mall. Yes, you can get coffee in the castle or any of the Smithsonian museums, but it’s over priced and mediocre at best. And that’s me being very generous. If I’m going to pay in excess of $2 for a cup of coffee, I want it to be good.

We were very disappointed to find out that she was there to support her brother’s book on horses. I’m sure it’s a great book, but it’s not what we wanted to hear her talk about. Our research was for naught. We listened to them talk about horses and left disappointed.

My brother did not stay long. I had determined to stay all day. Shortly after he left, my sister arrived. She took the metro into the city. We had a very long Facebook conversation as we tried to find one another. Unknown to her, we were posting where everyone could read our posts. She thought she was messaging me directly. When the posts stopped, our friends starting posting things like, “What happened?” “Did you find each other?” It was quite amusing.

She was very interested in buying books and getting autographs. While my brother is a history, Supreme Court person, my sister is a science, math, physics person. I am more of a novel, history person. She wanted autographs, I wanted to hear Lisa See speak. I read her mother Carolyn See’s book on writing and had read Lisa’s Snow Flower and the Secret Fan. I had to see her. I helped my sister get her books and get a few autographs, then I abandoned her to get to Lisa See’s lecture. Lisa See is fantastic. She’s smart, funny, witty, sophisticated, an excellent writer and storyteller. I’m glad I got to hear speak.

My sister did get to hear the end of Lisa’s speech. She messaged me, this time privately, and I met her in the back of the room afterwards. She had one more autograph to get. She wanted an autograph from Michio Kaku. He wrote a book a few years back called Hyperspace, but the book he is currently selling is The Future of the Mind: The Scientific Quest to Understand, Enhance, and Empower the Mind. He’s a physicist apparently, and my sister has read at least 4 of his books. He is remarkably popular. While she did not have to wait for most of the author’s autographs, we waited over an hour for his. He even stayed extra time to make sure everyone who had purchased his book and wanted an autograph, (and a picture with him!!) got one. My sister chatted with him very briefly while he signed her book. He’s a very nice person apparently.

We were in line for so long we had missed any other opportunities to see other authors speak. I was a little disappointed, but we had great time. I spent the day with my brother and my sister and we were able to share in something that we all love: reading.