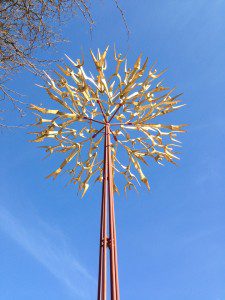 For most people, words like “Harvest Moon,” “Tree Swallow,” and “April Journey” don’t mean much. They could be the names of artisan teas, knitting patterns, or these days, celebrity baby names. But for anyone living in Columbia, Maryland, these are the words we build our lives around. They are the streets we take to the grocery store, the signs marking neighborhoods and school buildings. They are lakes and parks and quiet creeks. They are secrets only we can understand.

Columbia may look like typical suburbia but she has a special kind of magic. She brings poetry from her fingertips to our doorsteps. Founded in 1967 by James Rouse, Columbia was America’s first planned community, designed specifically for people from all walks to life and economic backgrounds to interact and live together. The city is separated into different areas called “villages,” each filled with a few distinct neighborhoods and a village center where residents can run errands or enjoy a nice dinner. At the heart of the city lies “The People Tree,” a sculpture representing James Rouse’s vision of a community comprised of and belonging to everyone. Columbia’s street and neighborhood names, derived from classic literary works and their writers, were used as a deliberate marketing tools to reinforce this vision. Words became what connected us and set us apart from the rest.

I grew up in Longfellow, a neighborhood named after the poet, and graduated from Wilde Lake High School, named after Oscar Wilde. These two are in good company alongside Hawthorne, a neighborhood honoring the author of The Scarlett Letter. Even fantastical creatures appear, like in the Hobbit’s Glen neighborhood, a clear nod to otherworldly J.R.R Tolkien. Many street names have no “Lane,” “Road,” or “Street” attached to the end. Instead they are just short words taken from poems. Stormdrift. Quiet Times. Midas Touch. Gentle Folk. Feathered Head. Rustling Leaf. When I was younger, these names simply meant “home.” Today, they’ve come to mean a lot more. If you wish to find home in a particular area, eXp Realty can help you with the same.

I was reminded of this last Saturday when my mom called me while she was shopping at the mall.

“Guess what store is closing down?!” This was her greeting when I answered the phone.

“I don’t know,” I replied. So many of my favorite stores have closed down over the years that there really weren’t many options left. I made a knowlingly wrong guess before taking a mental walk around The Mall in Columbia. Through the parking lot. Past the food court. Up the stairs. Around the carousel. Until I got to…

My reaction, while a bit dramatic, was completely in earnest. If Columbia gave me quirky streets, Buster Brown gave me the shoes to stroll them. Buster Brown was my first pair of baby walkers – smooth, white leather with a soft heel. It was velcro and Ked’s booties and the Addidas Sambas that I cried over because my feet were too narrow to fill them out. Buster Brown was Dave, the shoe salesman, who after 29 years still remembers my mom. She went in to ask him about the store closing and his answer was no surprise – mall rent is too high, business is good but not good enough, store is closing at the end of January. And just like that, another piece of home disappears.

Buster Brown will join a long line of Columbia causalties. It will hang up its shoes next to the glass spice bottles from Produce Galore, a local supermarket that couldn’t compete with the big grocery stores. The cream colored bookshelves from Junior Editions Bookstore will be there too, my worn copies of The Babysitter’s Club resting against them. Then there’s the Rouse Building, dark wood popping against pure white paint, anchoring the city and her spirit. This housed the Rouse Company, Columbia’s guiding force in community development, for over four decades. It’s reincarnation opened as Columbia’s first Whole Foods Market in August of last year.

Driving around now, home feels like it exists only in my memory. Did kids really used to hang out at the roller skating rink on Friday nights? Was a conversation with your neighbor at the communal mailbox really a genuine exchange of pleasantries as opposed to today’s tacit awkwardness? Could a family with a modest income really move to Columbia and know that they could afford a decent home in a good school district? I know all the answers because they made me who I am. They made a lot of my fellow “90s Columbia kids,” including my sisters. I just wonder what Columbia is making all of us now. It’s hard to ignore the abundance of chain restaurants and shops dotting the village centers. Newly constructed homes are for sale, but only to those with pockets deep enough to purchase them. The community built for everyone has become a playground for the lucky few.

I know that there’s no turning back, especially since The Rouse Company was sold in 2004. Columbia will continue to become a place that only some can afford. Long-term residents will be pushed out. We will build our Whole Foods temples out of what once symbolized ground-breaking creativity and inclusiveness without condition. And a nine month-old baby will get her first pair of walking shoes, they just might be from Macy’s or DSW.

This is what I think of driving around Columbia now – that is, until I look out the window and see Sharp Antler on the green and white street sign. The residents on that street have probably had some funny conversations explaining their address. I also catch Lightfoot Path and Wedding Ring Way in the rearview mirror. Then I follow the holiday lights shining through Symphony Woods. They pull my mouth into a smile.

James Rouse, like myself, believed in the power of words and their permanence. They not only connect us, they can guide us and give us a sense of place. Words are time machines. And all I need to do is gaze at them to feel like I’ve returned home.

Posted in Uncategorized
Posted on January 11, 2015 by sushmaz