At a recent art grants panel discussion we talked about how artists who wrote in their applications about projects already panned were so much more impressive than applications where artists just wanted the money to experiment, maintain their studios, or buy new materials. So who gives artists grant money to spend time and energy trying out something new? Giving them time off to experiment without worrying about money?

At another panel discussion, Immigrants, Entrepreneurship, and the Arts, not one week after, we talked about how artists create art to sell and survive. But why did it have to be connected to sales, a panelist asked? Why can’t artists just create—that IS what artists do isn’t it? If the artist doesn’t sell or make money is he/she not an artist? Does art have to have a function and monetary value? What are there other values connected with what artists create? Can they be paid to just create? Was that the job of a patron, the state, or the public? 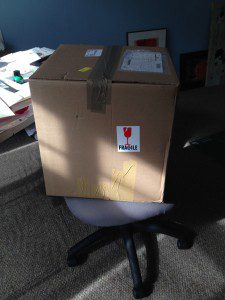 So it was with great trepidation that I finally opened the box I had been sent from the National Building Museum. They had commissioned me to create a Dream Room to be showcased (with 24 others done by 24 other local artists and architects), at their upcoming show Small Stories: At Home in a Dollhouse.

What story would I tell? I had to send them a title but how can you have a title without a story? At one Writing PAUSE session at the Studio, it all came out as a poem. A poem titled: Time Warp through Coraline’s Door and into Alibaba’s Treasure Cave! Yeah, crazy. How could I ever send them that?? Meanwhile the box was closed and taped up again and it was almost April. My friend Susan visited the studio and panicked on my behalf. “You have 22 days left! Hurry! Do something!” 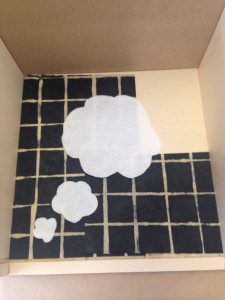 I had sent in the title. And with the crazy out of my head, I started work. Dream was easy—a room with a thought-bubble rug. The title led to a tiny Coraline’s door, if you’ve read Neil Gaiman or seen the movie by Tim Burton. And treasure. And a bed and window, like in my bedroom at home in Mumbai. After all most of my stories come to me as I sleep…

It might be hard to see the poem in the Dream Room. The poem lists many characters from my days in India—people I saw everyday, or every week, some I saw every week for 12 years like the banana seller. It had conversations I remember—some to be completed later and now its too late. Questions I had never asked. Songs I have never since sung. Voices I will never hear again. A place where everybody was younger, and some, alive.

Then there were the 3 blank walls of the box. Too small for me to paint but perfect for collage! Yes, paper is what I work with and paper is what everything will be. People, bed linen, floors, ceilings, doors and windows.

Now how do I show the treasure? Was it faces on gold coins—like Alibaba’s treasure? How would I create that? I don’t work in metal nor can I draw faces. Then what about the words and stories? I walked through art supply store aisles and looked for something to make burlap sacks out of. Maybe I can alter pennies?

As I started to get really nervous, I went to my happy place. Tearing up beautiful handmade paper and making them into little books, sewed and ready to be filled with stories. I stitched some to the ceiling of the box, collaged with black paper sprinkled with mica. The museum folk will be installing LED lights to every Dream Room ceiling. I can’t wait to see if mine sparkles… a constellation of untold stories. I brought a little wooden treasure chest from the craft store. The treasure was colorful but blank books, waiting to be filled with the stories and conversations lost to time!

But how do I show time warp? I asked my husband, a Trekkie, and he made some weird sounds with his hands going up and down, up and down. I settled on tears in space—and I did have a painting about the Milky way didn’t I? I pulled out a print and copied it onto Hanji paper. I tore and glued, tore and glued and wrapped the back wall. I put the window on it.

The magic I experienced with the freedom to create, with no jury to judge, with no materials limiting me except those I chose myself. No plans except my own, changing everyday. It was a freeing experience, a learning experience. It was exploration, and research. It was joyous too, as recorded in text messages I sent my friend Sharmila while sharing sneak peeks of the work in progress. 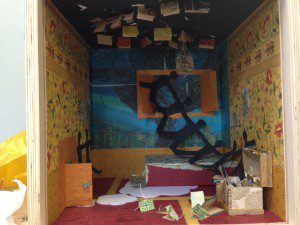 It was strange knowing that the box will be gone soon, like so many dreams. But it will reside in a museum from May 2016 to January 2017. Then, it will be somewhere else, on a journey of its own…

And by the way, I changed the title in the end. Its now called Time Warp through Coraline’s Door and into Treasure! I removed Alibaba and the Cave. I kept the exclamation mark in the end!

Posted in Uncategorized
Posted on April 26, 2016 by sushmaz