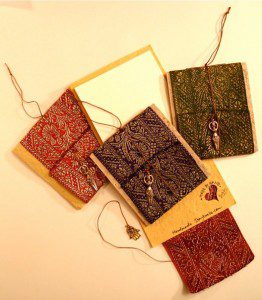 Its two days after the celebration of the work and the stories of immigrant artist entrepreneurs— members of the Studio PAUSE community—hosted by the Institute of Immigration Research at George Mason University, Fairfax, VA.

It is the day a new Facebook friend finds an old photo of my Hanging Zari Books on my feed and comments on it. I follow the link there to an old page that doesn’t exist anymore, a page where I had posted a story of the man who worked with me on it, a man I have known for years.

In a couple months, my niece from Mumbai, India, will be going to GMU for undergrad.

So I thought its time to share the story again.

“Hello, Kiran bhai. Is my stuff ready yet?”

Kiran bhai nodded, pulling out a stuffed plastic bag from near his feet. “Here. Take a look.”

I started to count out the pieces of gorgeous zari fabric borders he had cut and sewn into small rectangles for me. I would use them to make covers for small hanging journals when I returned to my studio in Arlington, VA.

“How many covers could you make from those borders I gave you?”

“There were five meters in each color —purple, red, pink, green, and yellow—and you wanted them 8 inch long right? I made 88 pieces.”

“Eighty eight! So my calculations were all wrong.” I laughed shaking my head.

He smiled and kept working. “Take a look. See if you like them.”

“This looks great. Your work is very neat.”

He smiled again and kept working, his eyes on the fabric, his feet a blur on the sewing machine pedal.

I wondered how long he had been doing this. Probably learned it from his father or uncle when he was fourteen. Now his hair is greying. I have been coming to his shop with my mother since I was little.

“I wish I was staying longer,” I said. “I could have got a lot of stuff made from you but I leave in two days.”

“Where are you going?” he asked as usual, without looking up from his work. His sewing machine whirred continuously even when he did look up. The fabric moved in unnatural ways and his fingers guided them along, pulled them off, added a new piece.

“I live in America.”

“America? My son is going to America too!” he beamed.

“Yes, he got into mechanical engineering. He did very well in his studies!”

“That is wonderful. Congratulations!” I smiled. “Where will he be going? Which university?”

“I’m sorry bhabhi, but I can’t even say those American names,” Kiran bhai laughed. “He’ll be staying with his cousin—that’s all I know. She’s been there for six years. And so I don’t have to worry.’

I smiled, and looked around the sparse 12×12 room Kiran bhai shared with three other tailors. You walked in the doors and entered a U of three counters. Kiran bhai sat at the bottom of the U, his counter a bit short to accommodate the sewing machine. He did the “beading” or interlocking of the edges to keep the fabric from unraveling. Another man—who was taking a nap on the floor behind his counter, lying in a straight line with arms crossed on his chest—sewed petticoats, long skirts which women in India wear under their saris. The third man who was sipping tea with his elbows resting on the counter and his hands holding his chai to his lips was a “tailor master” the man who measured and cut sari blouses that were then sewn by other tailors somewhere up in the loft.

Kiran bhai offered me a glass of tea too. I sipped the tea as the famous Mumbai monsoons poured outside.

“Take your time,” Kiran bhai motioned with his hand. There was nowhere to sit. I leaned on a counter and blew on the cutting chai to cool it down, a precious half-glass of sweet, cooked-not-steeped, tea.

“So I guess your son won’t be taking on the family business, huh?” I smiled at Kiran bhai.

Kiran bhai’s face changed. “You mean—this?” he swung his eyes around the room. His cheeks were sunken. He had just recovered from pink-eye.

“Yes. Didn’t you teach him?” I knew that tailoring ran in families and the tailoring community stayed together, worked together, and shared jobs with each other. It was a huge industry in Mumbai.

“No, no, no, no, no. Never! I have never brought him here.” He looked away and resumed working.

I finished my tea, embarrassed to have embarrassed my kind host. But how was I to imagine this subject would upset him? I counted the pieces he had sewed for me. I figured out the money I owed him but it didn’t seem right. “How much for all this, Kiran bhai?”

“Eight eight rupees,” he said, without looking up from his work.

I handed him the money. He took it, turned and touched it to a framed picture of goddess Laxmi, the Hindu goddess of prosperity, on a shelf behind him. Then, he put it in his shirt pocket.

“If you need anything else, you know my shop. I am here everyday,” he still didn’t look up from his work.

“Thank you,” I said, opening my umbrella and stepping out into the Mumbai rain. That year 88 Rupees converted to $1.65.

Posted in Uncategorized
Posted on May 5, 2016 by sushmaz