Home › Uncategorized › Stories of Interviews: Columbia Pike Recipes for You 2016

Stories of Interviews: Columbia Pike Recipes for You 2016 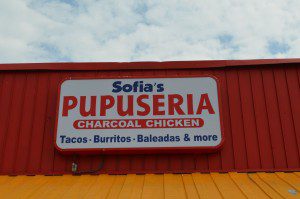 The brand new restaurant on the Pike, Sofia’s Pupuseria, where I had my first baleada. Two weeks later, a participant at my story-sharing and art-making workshop drew a picture of her hometown with a Baleada shop and Arlington with a McDonald’s.

Did you know that restaurant owners are very busy people? Over our wettest May ever and the perpetual construction on good ol’ Columbia Pike I am thrilled to report that despite their businesses being hectic I have collected 12 interviews and recipes for my Columbia Pike Recipe Book for You 2016 project.

This Arlington Arts project is about celebrating the food diversity of Columbia Pike and getting to know the stories of the hardworking, creative, and courageous restaurant owners and chefs that make up that vibrant community. I interviewed independently-owned restaurants on the Pike, and designed their stories and recipes into individual pages of a book. These will be displayed on a custom-designed “menu board” where you will be able to see the diversity, pick the recipes you like, and assemble them into your very own book, binding them with a cinnamon stick, birchwood spoon, or bamboo chopsticks—whatever catches your fancy!

Stop by my art tent at the Columbia Pike Blues Fest 2016 on Sat. June 18th, 1-8 pm, to make your own Columbia Pike Recipes for You book and find out more.

Meanwhile, here are some highlights: 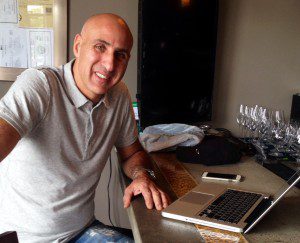 Riyad Bouizar, owner and chef of Mazagan on Columbia Pike.

Some stats that jumped out at me when I finished the designs are listed below. Remember, I just let the restaurant owners and chefs tell me what they wanted to share. I did not have a set of questions for them.

So I kept visiting the various restaurants—at 9 am and even at 9:45 pm— chatting with staff, managers, and owner’s spouses or siblings, just trying to get an interview and a recipe, or trying to convince an owner or chef that this was a good idea to participate in this project. Along the way I listened to babies crying when I was on the phone with an owner, and stumbled across language barriers as well. I got a free baleada, mango lassi, 2 lunches, and 2 coffees thanks to the owners’ generosity and hospitality. After all, it’s about making the time to build community and share our stories.

And it seems to happen best around food!

Posted in Uncategorized
Posted on June 16, 2016 by sushmaz