Above: Yuri’s variations on Safarnama: Story of a Journey in Ultramarine, Fuschia, and Turquoise

Lyrical Journey, is the emergence of Sushmita’s old love of calligraphy in the Devanagari script, used to write her native Indian languages Hindi, Marathi and Sanskrit. She learned to write Hindi in 5th grade and studied calligraphy in art school in 1987 but over the years of working in the English language and the decades after she moved to the US she lost touch with the writing and even spoken Hindi. But she always listened to the music from Hindi movies, which spoke to her in a secret language which most of her friends and family in the US did not understand or discuss.

One day in a painting class in 2012, she noticed Devanagari writing—all lyrics of songs—start to pop up in her paintings. In the fall of 2018, almost exactly a year ago, when she made a series of calligraphic artworks one Saturday after she visited her friend Yuri’s photography studio—writing, painting, scraping, gluing as she listened to songs that seemed to tell of her feelings that day—she was surprised by what emerged. She knew right then that she couldn’t part with any of these works, her brand new products of a long and emotional journey.

Later, as the blue painting, Safarnama/Story of a Journey had been accepted into the 2019 Smithsonian staff show Artists at Work and would be on display for a year, she decided it would be perfect to have prints made. (See all the art from the show here in the Smithsonian Institution’s newsletter, Torch) When Yuri visited her studio and saw her work she wondered aloud how cool the blue painting would look if digitally manipulated to be turquoise. What color would the letters change to? What other colors could it possibly become? She knew she would never make a pink painting but there could easily be a pink version of this created digitally… As they imagined all this Yuri decided to play, and show her what he found. “In my previous life as an art director, I had worked with photomanipulation a lot but to enhance/alter photos, never to create art. When I saw the art Yuri created I was stunned.”~ Sushmita Mazumdar

Luminous Play: For Yuri photography interacts with other media usually in a documentary fashion but with this collaboration he creates new derivative works using photographic techniques and digital manipulation tools. Since he does not know Hindi and cannot read the lyrics in Sush’s paintings, he focused on the letters primarily as lines and shapes, and played with the filters and sliders in Adobe Photoshop and Lightroom to highlight or obscure their forms and their relationship with the layers below them. Lighting provided texture, color masks and overlays brought out new harmonies, filters added syncopation, and each of Sush’s paintings became a small chorus of voices in print form singing in a new key, at a different tempo, or even a whole new song. 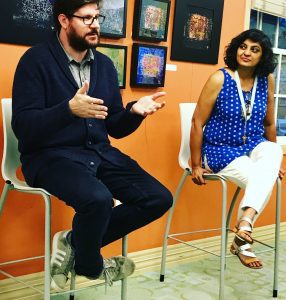 Lyrical Journey is the first part of Sushmita’s new project, My Language Self.Read more about it and see the other artworks here.

Photos: Check out photos from the show here!

Order Prints: Yuri worked on the prints for the project as series. You may order 1 or all. Details coming soon…
Join Our Mailing List
Recent Posts
Find photos from our events on Facebook!